Anderson, Alexandra – Population Response to Climate Change: Wintering Strategy has Carryover Effects on the Timing of Nest Initiation and Mate Choice in a Partial Migrant, the American Kestrel (Falco sparverius). 2014. 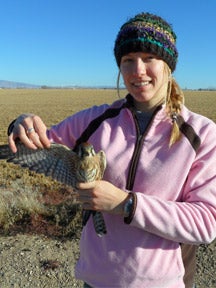 Global climate change has affected flora and fauna phenology.  Avian wintering areas have shifted north, migration distances have decreased, and for some species, a greater number of birds are staying year-round at breeding areas.  These changes may contribute to earlier arrival time at breeding areas and advancing nesting phenology in birds.  Increasing numbers of birds are nesting earlier which may be expected because warmer winters permit earlier nesting, and, for most species, it is beneficial to nest sooner because there is a strong seasonal decline in productivity.  Birds that over-winter on or near breeding areas may have the advantage of early access to mates and nests compared to non-residents, and assortative mating (non-random pairing) of over-winter residents and non-residents could contribute to the advancement in nest initiation dates.  Rapid population changes due to assortative mating could suggest an alternative way migratory birds respond and adapt to climate change.  This research on how avian populations are responding to climate change has important implications for predicting species distribution, abundance, or persistence, and it is especially important in the case of the American kestrel (Falco sparverius), a species considered to be in decline.

Population Response to Climate Change: Wintering Strategy has Carryover Effects on the Timing of Nest Initiation and Mate Choice in a Partial Migrant, the American Kestrel (Falco sparverius)

Visit ScholarWorks for additional information on this thesis.

Where Are Graduates Now? (Alexandra Anderson)