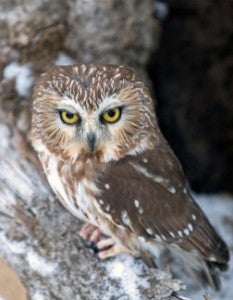 oon (>66% moon disk illuminated) oriented consistently to the northeast, but exhibited variable orientation when the moon was <66% illuminated. These results suggest that, in the presence of a bright moon, owls may chose to seek cover in forested habitat rather than migrate over open areas. Restlessness and orientation in Northern Saw-whet Owls did not relate to age or body condition, wind speed or direction, or simulated or natural cloud cover, nor did orientation vary throughout the migration season. However, under the influence of 100% simulated cloud cover, Northern Saw-whet Owls demonstrated significantly lower migratory restlessness compared with simulated partial cloud cover and clear skies. Furthermore, Northern Saw-whet Owls tested late in the night (2 h before sunrise) showed more restlessness than birds tested earlier in the night and immature saw-whets were more active than adults.