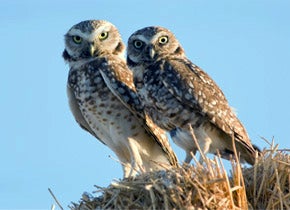 I investigated responses of Burrowing Owls (Athene cunicularia) to experimental conspecific brood parasitism to determine if they were capable of egg discrimination, and if they would accept or reject a parasitic egg introduced into their nest.

Size differences between host and parasitic eggs, and degree of variability among eggs within host clutches, had no effect on rejection.  Instead of selectively rejecting parasitic eggs, hosts buried them along with their own.  This implies that the hosts could not remove the parasitic egg or were unable to recognize it.

I also assessed changes in parental care by evaluating images from infrared cameras placed at owl nests.  There were no differences in parental behavior between parasitized and non-parasitized nests.  Thus, Burrowing Owls may either be unable to identify parasitic nestlings or unwilling to decrease parental care if the cost is decreasing their own offspring’s survival.

The results of this study provide evidence that conspecific brood parasitism may be a part of the behavioral repertoire of Burrowing Owls, and they also may provide insight into how laying determinacy can facilitate conspecific brood parasitism or mitigate its costs in this species. What is now needed is a comprehensive evaluation of Burrowing Owl family data to lend molecular support to the behavioral evidence of my research.

Visit ScholarWorks for information on the full text of this thesis.