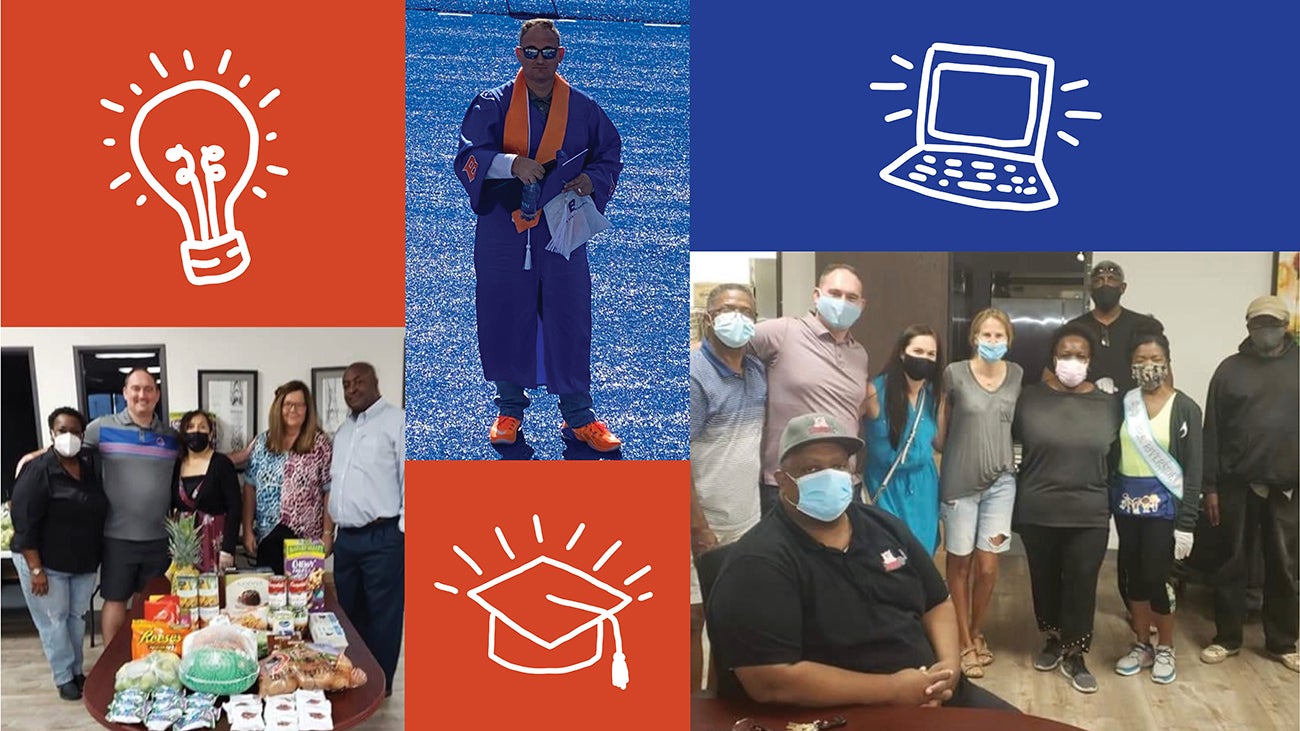 The sight of the famous field caught Ryan Hooper’s eye from an early age. Since graduating high school in 2000, Hooper said cheering for the Broncos from his home in Riverside, California, became a weekend tradition shared with friends and family. Hooper even managed to attend a few games at Albertsons Stadium, as well as follow the Broncos to games in San Diego and Las Vegas.

Despite his fandom, Hooper never thought higher education could fit his learning style. Instead of entering college and earning his degree, he decided to enter the workforce. But in 2008, Hooper lost his job as a result of the Great Recession, forcing him to reconsider his career options and enroll at his local community college.

“I just couldn’t get any work. It was just warehouse labor and the compensation just didn’t cut it,” Hooper said.

A Change of Plans

With the plan to become a medical nurse, Hooper earned three associate degrees from Riverside City College. But just a few weeks into nursing school, Hooper said he knew that degree path was not for him.

“I wanted to make a bigger change,” he said. “As a nurse, I can only help the patient in front of me. I thought, ‘How could I help the health care industry and make changes that could benefit a large number of people?’ I wanted to write policy or help implement any kind of change in the health care field.”

After exploring his options, Hooper decided on a degree in public health, a sector that focuses on prevention, intervention and advocacy for communities large and small. But the universities in his area did not offer the flexibility he needed to both learn and provide for his family. That’s when his wife discovered an online degree program offered by a school Hooper knew well.

“In Southern California, every kid grows up wanting to go to either USC or UCLA. That wasn’t what I wanted to do – I wanted to go to Boise State,” Hooper said. “It was something I felt called to do. Everything about the school – the community, the campus – you can feel how connected people are.”

For Hooper, online learning came easily. His unique, asynchronous learning style helped him better absorb the material, even in classes he hadn’t previously excelled in. While taking his required math courses in the public health program, Hooper said Dr. Kirk Ketelsen provided incredible care and attention to detail, meeting with Hooper every week.

“Math is not my favorite subject, but Dr. Ketelsen offered to talk weekly via Zoom, and we were able to connect on a level I really appreciated,” Hooper said. “Every faculty member was great, but the way we connected inspired and motivated me to continue my education.”

As his two-year stint at Boise State drew to a close, Hooper pondered what his final capstone project would cover. During that time, COVID-19’s effects were felt across the country, pushing the American health system to its limits. Hooper said during 2020, he realized exactly how he could positively impact his community.

While serving as a nonmedical volunteer for Riverside County, Hooper said locals were having difficulty finding the everyday community health resources they needed due to COVID-19. Not long after, Hooper began his capstone project, creating the idea for a behavioral health counseling and social work services center called Heart and Soul Collaborative.

“I wanted to create something that was tangible,” Hooper said. “This was my major, and I had to demonstrate what I had learned and what I’ll be doing. It really paid off.”

Heart and Soul Collaborative’s journey didn’t end with Hooper’s bachelor’s degree. After graduating from Boise State in 2020, Hooper took his idea to California Baptist University, where he earned his master’s degree. While in graduate school, Hooper also earned his Certified Health Education Specialist license, a feat that left his graduate professors in awe.

“The curriculum at Boise State was so good that I got my CHES license before I even graduated with my master’s,” Hooper said. “I had professors at California Baptist telling me I was already qualified for my CHES, all because Boise State was that detailed and that great.”

Now, Heart and Soul Collaborative partners with local health care insurance providers, offering individual, marriage and family counseling to the Riverside community. While Hooper continues building his nonprofit organization, he will also work on earning his doctorate in public health from Loma Linda University, with the goal to return to teach at the school that originally sparked his passion for public health.

Back to the Blue

The Blue in Hooper’s blood runs deep, evident by the trip he made to Boise in 2021. When COVID-19 restrictions were eased, Boise State University offered the class of 2020 the chance to walk and receive their diploma, as the previous year’s ceremony had been held virtually. Hooper was getting the opportunity to step on the hallowed ground he had spent so much time cheering for.

“I was just ecstatic,” he said. “I was actually going to have the chance to walk on the blue field that I have been watching for nearly 20 years.”

Now, a square of that blue turf hangs on the wall of his office, a reminder of where he hopes to be after securing his doctorate.

“The ultimate goal would be to come back and teach at Boise State and give students the same motivation, compassion and drive to be the best they can. That’s where my heart and soul is,” Hooper said. “I have compassion for my community through my nonprofit, but I also have compassion for the school and the teachers that got me there. I want to help build strong leaders in the public health field.”