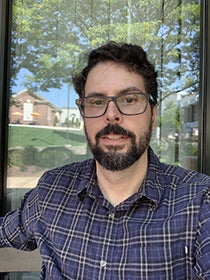 BFA from The School of the Art Institute of Chicago; MFA, Yale University, School of Art

Roland Becerra is a visual artist and filmmaker. His latest project is titled AGATHA is a feature length animated film that he wrote, directed and produced with his wife Kelly Bigelow Becerra. Roland did all the illustrations and animation for the project. Their previous short film “Dear Beautiful” premiered at the Sundance film festival.

Using his backgrounds as a Fine Artist in combination with his love of visual storytelling, he painstakingly creates the world of his films. Which utilizes a labor-intensive experimental film-making process that blends live-action with animation. With the goal of creating a moving painting.

Becerra has also studied at The Pennsylvania Academy of the Fine Arts and The Cleveland Institute of Art. He has also won several artist grants and awards and has exhibited his paintings widely throughout the North East including six solo shows; His work has also been published in several publications throughout his career.