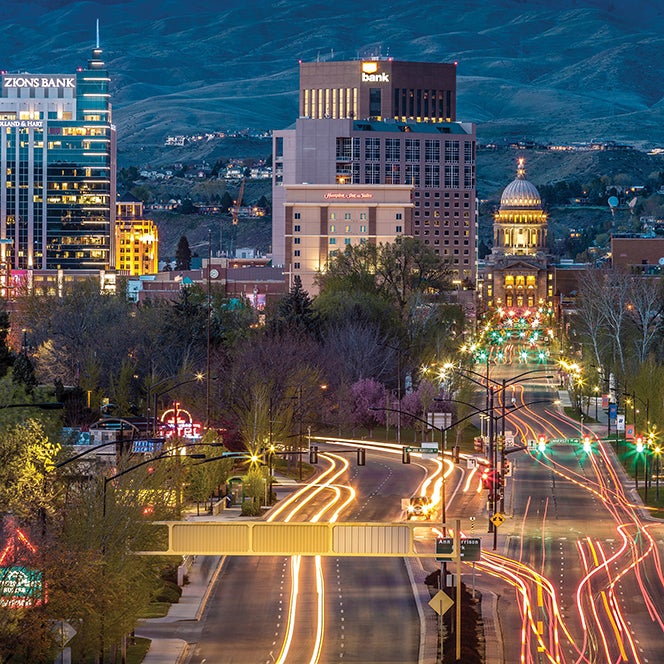 The Fourth Annual Treasure Valley Survey was conducted September 14th – 22nd, 2019, and surveyed 1,000 adults over the age of 18 who currently live in Ada, Canyon, Boise, Gem, and Owyhee counties. The sample is designed to be representative of the population of the Treasure Valley, with 62% from Ada County, 30% from Canyon County, 4% from Boise County, 3% from Gem County, and 2% from Owyhee County. This was a mixed-mode survey which contacted respondents on land line phones (33%), cell phones (33%), online (33%), and via text message (3%). The goal of using multiple means to contact respondents is to increase our coverage of the population to people who may not respond to traditional phone surveys. This survey focused on growth in the Treasure Valley, along with the issues of transportation, housing, and taxes. The survey has a simple random sampling margin of error of +/- 3.1% and was conducted by GS Strategies Group.

With these general attitudes about growth in mind, we asked respondents which aspects of growth concerned them the most on a scale from 1 (not at all concerned) to 10 (extremely concerned). Of the elements of growth that people were presented with, increased traffic congestion (73%) and increased cost of living (68%) generated the highest percentage who gave responses from 8-10 on the scale. Only 5% of respondents gave a response of 1-3 for increased traffic congestion, and 6% gave that response for increased cost of living.

The remaining elements of growth generated more modest, but still considerable levels of concern. 52% of people gave an 8-10 rating of concern for overcrowding in the places they frequently visit, 50% for impacts on the environment, 46% for increased crime, 44% for a change in the values and ideas that people have, and 39% for sprawl.

In sum, we see that concerns about growth are most acute in the areas of traffic congestion and the affordability of housing. Before looking at attitudes about these two issues in more depth, we turn to who the new residents are, and what they look like as a group.

What are the top reasons that recent arrivals give for moving to the Treasure Valley? We asked those who stated that they had moved here to give their top two reasons. We find that being near family is the most frequently stated response, with 29% of those who have arrived in the last 10 years giving that as one of their top two reasons. The second most frequently cited reason was employment, with 28% of recent arrivals mentioning jobs as one if their top two reasons. After these two motivations for relocating to the Treasure Valley, we see a sizeable drop-off in the frequency of the remaining considerations, with affordability/cost of living (11%), education/college (9%), and low crime rate (6%) rounding out the top five reasons that were given.

One final question that we looked at regarding the new arrivals is their political orientation, as this has consequences for whether political change (or stability) is likely to follow the influx of new residents. Looking at those who have arrived in the last 10 years, we find that 51% identify as Republicans, 30% identify as Democrats, and 19% as Independents. These numbers are not dramatically different from the group who has been here for longer than 10 years, where 46% identify as Republicans, 37% identify as Democrats, and 17% identify as Independents. These differences between recent arrivals and those who have been here for longer are not statistically significant. Overall, the findings shown here do not point to a changing political landscape in the Treasure Valley as a whole as a result of new arrivals.

In conclusion, when comparing those who have arrived in the last 10 years to those who have been here for longer, the two groups are more similar than they are different. Recent arrivals appear to be a younger group on average, but they have similar levels of education and income, as well as similar political orientations. The most common reasons that they cite for moving to the Treasure Valley are to be near family, and for employment.

Finally, to see what the tolerance for different commuting times is, all respondents were asked what the maximum length of time is that they would be willing to commute for employment. The most common response (38%) was that they would be willing to commute a maximum of 21-30 minutes, with sizeable numbers also reporting 11-20 minutes (21%) and 31-60 minutes (21%). Few people reported a maximum time of 10 minutes or less (7%) or more than 1 hour (6%).

Significant increases in home prices and rents have occurred across much of the Treasure Valley, leading to concerns about the affordability of living in the area. We began exploring the issue of housing by taking a look at current housing patterns among the respondents to the survey. A sizeable majority (77%) report currently living in a single-family home, with much smaller numbers residing in townhomes (6%), condominiums (9%), or mobile homes (4%). Most of the respondents owned their housing (70%), but a sizeable number (28%) were renting.

Although residents of the Treasure Valley do not appear to have a decided preference for where future development should occur, there are some patterns in the kinds of housing developments that could be built. Increasing the density of housing is one option for addressing growth, but it could take a variety of forms ranging from single family houses on small lots, to condominiums and townhomes. To assess people’s attitudes about different kinds of housing, we asked them to rate how they would feel about single-family homes on small lots, townhouses and duplexes, condominiums and apartments, and manufactured and mobile homes being built near where they live on a scale from 1 (not at all favorable) to 10 (extremely favorable).

Looking at the percent who report a feeling of 8-10, which is a relatively high level of favorability, we see that single-family homes on small lots are the most well received with 36% giving an 8-10, followed by townhouses and duplexes (23%), condominiums and apartments (18%), and manufactured and mobile homes (12%). In general, these are relatively low percentages who report high levels of favorability for these different housing types. Looking to the other end of the spectrum at those who gave a favorability rating of 1-3, we see that manufactured and mobile homes receive the most negative reaction with 55% of people giving a rating of 1-3, followed by condominiums and apartments (40%), townhouses and duplexes (29%), and single-family homes on small lots (21%).

Another way to think about this issue is by presenting people with the options of acting to make housing more affordable, or letting market forces determine the price of housing. When presented with these options, we find that 57% favor action being taken, and 33% side with allowing market forces to determine the price of housing. We followed up with the 57% who support action being taken and asked who they believed should act. When presented with the options of the government, the private sector, non-profit organizations, or all of the above, we see that the government emerges as the most popular entity that should act. A majority (56%) selected the government alone, and with 20% who said “all of the above,” the percentage who supported government action was 76% of those who supported action as opposed to market forces. There was also substantial support for the private sector acting, with 31% selecting that option alone, and when adding the 20% who responded “all of the above,” there were 51% of those who prefer action to be taken as opposed who expressed a preference for private sector action. Fewer (18%) selected non-profit organizations alone, which amounts to 38% when adding in the “all of the above” responses.

In sum, we find that there are a sizeable percentage of Treasure Valley residents (42%) who report that the cost of their housing places a financial strain on themselves and their family, and a majority (66%) think that it is unlikely they would be able to find comparable housing that they could afford if they had to move out of their home. Looking at the kinds of high-density housing that could be built to address housing needs, people are most favorable to single-family homes on small lots being built near where they live, and less favorable to townhomes, condominiums, and mobile homes. Finally, a majority of people (60%) are generally supportive of the government acting to help address the affordable housing issue in the Treasure Valley.

Underlying discussions of how local governments should respond to growth is the question of how to raise revenues to tackle some of these challenges. We focus here on people’s support for local option taxes. These taxes are currently not allowed under Idaho law across most of the state, but are often referenced by local governments as a tool that they could use to raise revenues for transportation or housing initiatives. Recognizing that these taxes are not currently allowed, we first look to whether residents of the Treasure Valley believe that they should be allowed to vote on a local option tax. This is the fourth year that we have asked this question, and we find that support for allowing people to vote on local option taxes remains high at 62% in favor. This number is essentially unchanged from last year where we found 65% in favor, suggesting that support is relatively stable. Majorities of Democrats (74%), Independents (66%), and Republicans (55%) favored allowing people to vote on local option taxes, as did majorities of all age groups and geographies across the Treasure Valley.

In sum, majorities across the Treasure Valley remain in favor of allowing people to vote on local option taxes, which is currently not permitted under state law. Further, we see that majority support remains when people are asked whether they would vote in favor of a local option tax to fund both public transportation improvements as well as road and bridge improvements in their town. With this in mind, we recognize that support would likely fluctuate depending on the magnitude of the tax increase that was proposed, which we do not explore here.

When looking at whether people think that their town or city acts upon the input they receive from residents, we find that 53% of respondents agree with this statement, and 35% disagree. Although a majority agree, this is fewer than believed that their local governments welcome input.

Across both questions it appears as though majorities hold positive assessments regarding local government responsiveness to citizens, though fewer people believe that their government acts upon the input they receive compared to those who believe that they welcome input.

As the rate of growth in the Treasure Valley remains one of the highest in the nation it is no surprise to see that issues related to this increase in population are on the minds of the people who live here. The majority see our current rate of growth as too fast, and point to traffic congestion and affordable housing as the most concerning issues that they face. While policy solutions are undoubtedly more complex than the questions we are able to ask on a survey, there does appear to be general support for some potential solutions to the challenges that the region faces.

Idaho Policy Institute at Boise State University works across the state with public, private and nonprofit entities. We help articulate your needs, create a research plan to address those needs and present practical data that allows for evidence based decision making. We leverage the skills of experienced researchers and subject-matter experts to respond to the growing demands of Idaho communities.