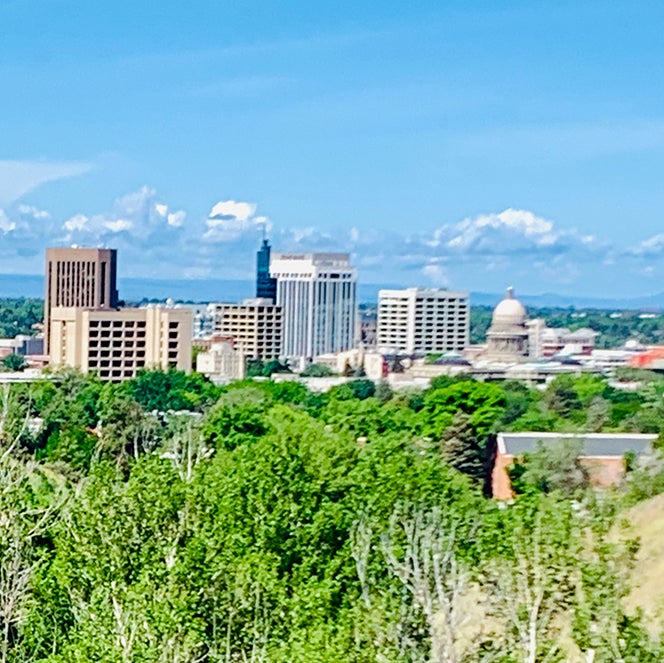 This report is an extension of the Seventh Annual Idaho Public Policy Survey, which was conducted November 13-21, 2021 and surveyed 1,000 adults who currently live in Idaho. In addition to the statewide responses, the Treasure Valley was oversampled to survey 655 residents (demographically weighted to approximate 691 residents) of Ada (65.7%), Canyon (26.9%), Boise (3.3%), Gem (3.1%) and Owyhee (1.1%) counties. These respondents were asked an additional bank of questions unique to the Treasure Valley. The sample is designed to be representative of the population both geographically and demographically, with a simple random sampling margin of error of =/- 3.7%. The survey was administered by GS Strategy Group via cell phone (29.5%), landline phone (27.3%), online (31.5%), and text message (11.7%).

The pace of growth in the Treasure Valley has consistently been a major concern for residents in recent years and those concerns continued in 2021. Using survey responses from a geographically and demographically representative sample of 655 Treasure Valley residents (demographically weighted to approximate 691 residents), we analyze their opinions on growth issues ranging from affordable housing to taxation. Based on our analysis, we find:

Growth remains a significant issue in the Treasure Valley and its numerous related issues are something that policymakers will have to grapple with for years to come. By understanding the attitudes of their residents, they can better inform their deliberations surrounding future growth and development.

This report includes results only from Ada, Boise, Canyon, Gem, and Owyhee Counties

Continuing trends from past years, Treasure Valley residents have substantial concerns about growth. We asked survey respondents whether they believed the Treasure Valley was growing too fast, too slow, or about right. An overwhelming majority of respondents – 82% – say it is growing too fast, compared to 13% who say it is about right. Only 2% indicated that it was growing too slowly. The gap between “too fast” and “about right” has grown substantially over the last five years, going from a 15-point gap in 2017 to a 70-point gap in 2021.

Growth concerns were more acute among people who have lived in Idaho for over a decade (84% too fast) compared to those who moved to the state within the past 10 years (75%), although both groups overwhelmingly indicated that the Treasure Valley was growing too fast. Geography also played a role, as Canyon County respondents were more likely to answer “too fast” (88%) than those who live in Ada County (79%).

Gender also affected one’s answer, with women more likely to say the Treasure Valley was growing “too fast” (87%) compared to men (77%). Similarly, men were more likely to answer that the growth was “about right” (18%) than women (8%).

Treasure Valley residents do not substantially differ from the rest of the state when it comes to controlling growth, with only 26% saying Idaho should stop recruiting companies to the state even at the expense of more limited employment opportunities – 58% think the state should continue to attract companies to the area, even if it exacerbates growth related issues, while 16% were unsure. Support for continuing to recruit was higher in Ada County (61%) than Canyon County (52%) or other areas in the Treasure Valley (56%).

With the intense growth that the Treasure Valley has experienced over the past several years, a recurring question in the community is “How different are the people coming here from the people who already live here?” While the survey only collected data on how long ago people came to Idaho rather than the Treasure Valley specifically, it still yields some interesting results.

Once again, there is no significant difference in terms of employment among Treasure Valley respondents when comparing newcomers who moved to Idaho within the last 10 years and longtime residents who have lived here for more than 10 years – a little more than half of both groups are currently employed, while roughly a quarter are retired. Newcomers are slightly more likely to report being unemployed (9%) compared to longtime residents (5%).

One of the most visible impacts of growth is its effect on the housing market. With Treasure Valley housing costs continuing to rise year-over-year, residents have faced uncertainty in the face of the volatility. We once again asked if someone had to move out of their home today, for whatever reason, how likely was it they would be able to find a similar home for the same amount?

Two-thirds of Treasure Valley residents (67%) say they are unlikely to find a similar home for the same amount, a 14-point decline from the previous year’s results. At the same time, 30% of residents say it is likely, a 13-point improvement over last year. While these results are still concerning overall, the positive trend compared to last year potentially highlights changes in the housing market. Housing concerns also appear to be heightened among longtime Idaho residents (70% unlikely) than newcomers who moved to the state within the last 10 years (56%). Concern was greater in Canyon County (71% unlikely) than in Ada County (64%).

As one might expect, home ownership impacted one’s level of concern. Over three-quarters of renters (76%) say it is unlikely they would find a similar home for the same price, compared to 61% of homeowners. Unsurprisingly, income had a clear effect on someone’s answer, with the likelihood of finding a similar home for the same value lowest among households earning less than $50,000 a year (83% unlikely) compared to households earning $50,000 to $100,000 a year (66%) and those earning more than $100,000 a year (46%). Similarly, those who reported their financial situation was worse off since the COVID-19 pandemic indicated it was unlikely they would be able to find a similar home at a much higher rate (86%) than those whose financial situations were better (52%) or about the same (65%).

Understanding that housing is a significant concern, we were interested in identifying the mitigation approach most favored by Treasure Valley residents. Asked which type of development option is most favorable to meet growing demand for housing, the highest response was building new single and multi-family housing choices on undeveloped land (32%). About 20% favored building new multi-story buildings to increase the supply of apartments and condominiums, while 18% preferred to focus on new alternative types of housing like tiny homes. The least liked option was to increase density by putting more people into existing older neighborhoods (14%).

Home ownership and income had a limited effect on residents’ responses. Renters were more likely to support alternative housing options, like tiny homes (23%), than homeowners (16%), while those with higher annual household incomes expressed more support for building additional single and multi-family homes, which was the top response for all income levels. While the second most preferred option of households earning over $50,000 a year was to build more apartments and condominiums, those earning under $50,000 favored alternative housing like tiny homes more.

To better understand what residents feel can best help housing affordability in the Treasure Valley, we asked them to pick from a series of options. Just under a third (31%) said housing affordability is largely market-driven and cannot be fixed by government programs. Nearly a quarter (24%) said developing new incentives for building affordable units would be most effective, while slightly fewer (19%) said charging additional fees on development projects to fund affordable housing would help most. Creating new government-funded housing programs and projects received the least amount of support among residents (15%).

Once again preferences split along party lines, with more Republicans (41%) and Independents (34%) indicating a belief that housing affordability is market-driven, followed by a preference for developing new incentives (22% for both). Democrats were much more likely to support new incentives (32%), charging additional fees (27%) or offering new government programs (23%) – very few (6%) said it cannot be fixed by government programs.

Longtime Idaho residents in the Treasure Valley were not substantially different in their preferences than those who came to Idaho in the last 10 years, with longtime residents being only slightly more supportive of charging additional fees (20%) than newcomers (15%). Likewise, Ada County residents were more supportive of additional fees (20%) than Canyon County residents (13%), but otherwise not dissimilar.

As noted in one of the preceding questions, one alternative housing solution is the use of tiny homes. A tiny home is a home that is designed to be 400 square feet or smaller, but some city or county zoning ordinances may prohibit them. In order to gauge how receptive Treasure Valley residents would be to tiny homes, we asked if they would favor or oppose their local government changing zoning laws to allow tiny homes to be built within their city. Treasure Valley residents appear to be receptive to tiny homes, with 71% saying they favor a zoning change to allow them. Only 21% of residents are opposed.

Support was stronger among Ada County residents (73%) than Canyon County (64%) or other areas in the Valley (69%). In addition, longtime residents expressed more support for tiny homes (72%) than those that moved to Idaho within the last 10 years (65%).

Home ownership did not appear to substantially impact the proportion of Treasure Valley residents who feel property taxes are too high –  renters (49%) were only slightly less likely to say so than homeowners (53%). A larger gap is found among other responses, as 42% of homeowners said property taxes were about right compared to only 20% of renters – although a greater proportion of renters (28%) indicated they did not know one way or the other compared to homeowners (5%).

When it comes to who bears the responsibility for the levels of property taxes, more Treasure Valley respondents (49%) indicated that city and county governments are primarily responsible for property tax levels, 5-points below the statewide population. About 34% of Treasure Valley respondents say it is the state’s responsibility, up 4-points from statewide levels. Newcomers to the state were slightly more likely to view city and county governments responsible (51%) than longtime residents (45%).

Party identification appeared to impact responses, as Republicans (47%) and Independents (53%) were more likely to hold city and county governments responsible than Democrats (39%). By the same token, 43% of Democrats say the state is most responsible, compared to 31% of Republicans and 34% of Independents.

Impact fees are a mechanism allowed in Idaho Code where governments charge developers to help offset the cost of new improvements needed to accommodate growth. Currently in Idaho, impact fees can only be spent on widening roads and intersections, though some wish to expand their use to include other infrastructure improvements such as curbs, gutters, sidewalks, and bike lanes.

When asked whether the use of impact fees should be expanded to allow this, Treasure Valley residents largely mirrored the statewide response – 70% support expanding their use, compared to 18% who think impact fees should only go towards widening roads and intersections.

Support was strongest among Democrats (87%), although a majority of Independents (73%) and Republicans (60%) also support expanded use. Similarly, Ada County residents were more likely to support expanded use of impact fees (74%) than Canyon County (64%) or other areas of the Treasure Valley (60%), but all areas showed majority support.

Growth remains a major concern for most Treasure Valley residents, with more expressing concern over its rapid pace each year, as well as how it may impact their ability to find comparable housing for similar prices. Even so, most are willing to tolerate its impact in return for recruiting more companies and jobs to the state. But the tradeoffs related to housing remain substantial and many in the Treasure Valley are split on what to do about it – ranging from increasing the supply of single and multi-family homes to trying alternatives like tiny homes. It is clear that for the Treasure Valley, growth is an issue that policymakers will have to grapple with for years to come. By understanding the attitudes of their residents, they can better inform their deliberations surrounding future growth and development.

Idaho Policy Institute at Boise State University works across the state with public, private and nonprofit entities. We help articulate your needs, create a research plan to address those needs and present practical data that allows for evidence based decision making. We leverage the skills of experienced researchers and subject-matter experts to respond to the growing demands of Idaho communities.