Despite precautions and measures taken to reduce the spread of infectious diseases throughout hospitals and clinics, the percentage of patients who obtain health care-associated infections (HAI) is substantially high. Health care-associated infections have been recognized as a leading cause of death or illness, not only in the United States but worldwide (Han, Sullivan, Leas, Pegues, Kaczmarek, & Umscheid, 2015). Cleaning protocols are a crucial part of hospitals and clinics. When cleaning protocols are not followed correctly, patients and healthcare workers are put at unnecessary risk for acquiring diseases. Han et al (2015) reported on a study in 2011 that an estimated 75,000 deaths came from HAI’s in the United States alone. All healthcare workers should know proper cleaning protocol to help reduce the spread of disease. While many protocols are put into place in healthcare settings, they may not always be followed. This project evaluated the effectiveness of cleaning protocols by examining whether there were significant differences in cleaning protocols between hospitals and clinics. It also evaluated if those protocols were sufficient enough and furthermore, how effective disinfectant dwell times can be in removing microbes.

The materials that were used were TSA plates, sterile swabs, and distilled water. The room was cleaned after an exam according to protocol, i.e. the technologist had “wiped” down the room. The samples were obtained using a sterile swab wet with distilled water and used the spinning technique with the swab on different high touch items. After the item was swabbed, the student used the clam-shell method with TSA plates to avoid contamination. The samples were left out at room temperature for 96 hours to allow for growth of microbes.

Positive vs Negative Results in Clinics

Positive vs Negative Results in Hospitals

Tests were conducted on items touched by patients and technologists. Samples were taken from one hospital setting in the Pacific Northwest. 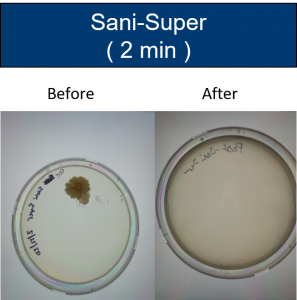 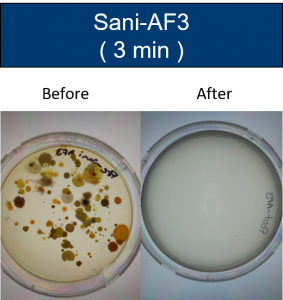 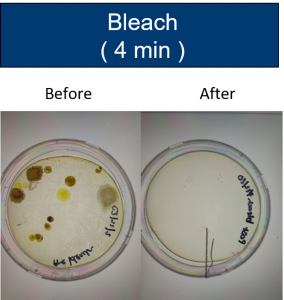 The effectiveness of cleaning, which includes the several steps taken to help reduce the spread of disease or bacteria, is a critical part that all professionals in the medical field should know and follow. While wiping down surfaces with disinfectant is an important step in the removal of bacteria or other infectious agents, several factors such as not using the correct type of disinfectant or not using enough wipes can have an effect on how well the area is cleaned. Several factors could contribute to insufficient cleaning resulting in growth being seen. One being improper dwell time and the lack of understanding how the cleaning products kill different pathogens. For instance, clostridium difficile (c.diff) cannot be killed via hand sanitizer nor by a normal disinfect cleaner. For example, to remove c.diff properly, one must hand wash with soap and water and use a stronger disinfectant base such as bleach or an accelerated hydrogen peroxide (Han et al., 2015). This team conducted further research by testing four different types of disinfectants commonly found in healthcare settings and their dwell times in order to test the effectiveness in removing bacteria.

Even though different sites were swabbed and tested, all four locations had cleaning protocols that were the same in scope. These results reveal that the protocols may not be effective enough or that the technologists aren’t following them correctly. The findings displayed that at least one high touch area was not cleaned properly from each site. Of all the items tested, the area that contained the most microbial growth were the lead shields compared to the other frequently touched items. When it comes to the dwelling time of common disinfectants, the results came back negative for microbial growth when the item was properly allowed to disinfect. The picture results that were obtained demonstrate that infectious diseases can and have the ability to be transported to other areas of the examination room and possibly even to other areas of the hospital. The control of the spread of infectious diseases and the reduction of the incidence of healthcare-acquired infections is a vital part of a technologist’s job.

For questions or comments about this research, contact at Kate Maryon at katemaryon@u.boisestate.edu.