In mid-2020, Boise State’s film and television arts program moved to its new home in Pioneer Hall, a dedicated space complete with a full film studio and computer lab.

The space has been a boon to the program’s crown jewel, the Narrative Television Initiative, a multi-semester project in which students write, film and produce three episodes of an original TV series.

“At the end, students have something on their resume that will stand out as a unique and innovative experience at Boise State, something that shows they didn’t learn everything sitting in a classroom. They actually went out and did it,” said Richard Klautsch, a professor and head of the Department of Theatre, Film and Creative Writing. “They can leave Boise State and join a film crew anywhere.”

The film and television program has been popular. Faculty expected enrollment to be around 50 students in 2020. Instead, more than twice that number signed up for classes to study everything from writing for the screen, to production, to cinematography. As of fall 2021, 117 students were pursuing degrees in film and television arts.

“I think that the university allocating space in Pioneer Hall to us had a major impact on the number of students who saw Boise State supporting this program and they knew things were happening here,” Klautsch said.

The NTVI’s current production, “The Chinese Tourist,” is the first to be filmed in the new space.
“It’s amazing. We built a set there,” said associate professor Ryan Cannon, who has spearheaded the NTVI since 2016. “It’s one of the characters’ bedrooms, and later, it’s going to be a studio apartment. Instead of having to find these locations, we were able to build them from the ground up, and to our specifications.”

The new space is just one more asset that helps the NTVI operate like a professional production. 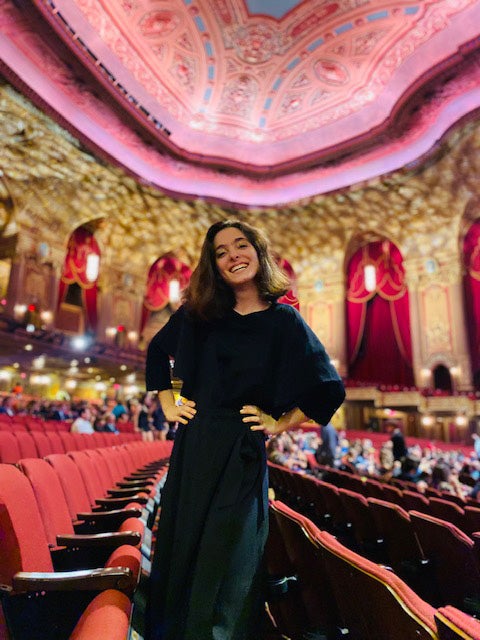 Bella Hall (left) graduated from Boise High School in 2020. Because of concurrent enrollment at Boise State, she entered college as a junior. She’s majoring in film and television arts.

Hall premiered three short films and two music videos at the All American High School Film Festival in New York City in October. The festival did not take place in 2020 because of COVID-19, so Hall was eligible to enter her work. She also participated in the Film Invitational where she had three days to shoot and edit a short in New York. One of Hall’s music videos was nominated for Atlantic Records: Best Music Video. Her short, “Pizza is Worth Waiting For,” won for Best Film Invitational.

Become a donor to support Film and Television at Boise State.

A spring premiere for “The Chinese Tourist”

The Narrative Television Initiative’s current production tells the story of Jade, a Chinese exchange student who is navigating her last semester in college while contending with personal difficulties in her home country.

Di Bei, a recent graduate of Boise State’s MFA in creative writing program, wrote the script based on personal experiences. She also stars in the production. “The Chinese Tourist,” she said, is her “love letter to ‘Fleabag,’” the celebrated British series written by and starring Phoebe Waller-Bridge.

“The idea of my protagonist, Jade, breaking the fourth wall and talking to the camera is inspired by Waller-Bridge,” Bei said.

“As a fiction writer, I was used to having sole control over my writing,” Bei said. “NTVI is my first time being in a writer’s room. It required communication and collaboration. I have learned a lot about the art of letting go.”

The production involved close to 100 students working in pre-production, filming, editing and more. It required casting several native Mandarin speakers. The crew recruited actors from on campus and beyond.

In the spring, the filmmakers will partner with students in the music composition program to score the film. “The Chinese Tourist” will premiere on March 14, 2022 at Boise’s Egyptian Theatre.

Bei said that the production forever changed her as a writer and as an actor. “I realized that writing – at its core – is living. Acting at its core is living. There is no need to distinguish between art imitating life and life imitating art. Life is art.”

Become a Donor to Support Film and Television at Boise State.